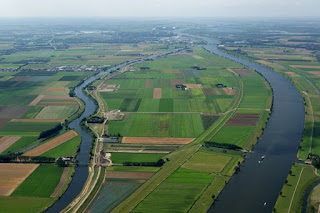 Some Louisiana government officials, including
the ex-governor, took a few trips over to the Netherlands to
"research" how the Dutch spent billions of dollars to protect themselves from the water. When they returned, they were quick to ask the federal government for their own billions, but failed to disclose how the Dutch are now rethinking their water management. The Dutch have decided that it is better to live in harmony with the sea, instead of fighting her with large levees and gates. This
is the foundation that New Orleans was built on (Notice how the older parts did not flood), and it is something that deserves another look. More info located in this NY Times article:
http://www.nytimes.com/2013/02/17/arts/design/flood-control-in-the-netherlands-now-allows-sea-water-in.html?pagewanted=all&_r=0

Popular posts from this blog

A new collection of five minute-long On Design stories—developed by the team behind Section D, Monocle 24's 24's weekly review of design, architecture and craft—profile a person, survey a place, or unpack an idea that’s changing or shaping design and architecture today. We've selected fourteen of our favorites from the ongoing series, examining issues as wide as Postmodernism and the architectural competition, to five-minute profiles of Alvaro Siza, Josef Hoffman, Kengo Kuma and Superstudio.

When applying for an architecture job, you need to make sure you have the perfect portfolio. While a clever and attractive business card might help you initially get a firm's attention, and a well-considered résumé or CV might help you prove your value, in most cases it will be your portfolio that makes or breaks your application. It's your portfolio that practices will use to measure your design sensibilities against the office's own style and to judge whether you match up to the talents claimed in your résumé.

That's why in March, we launched a call for our readers to send us their own portfolios so that we could share the best design ideas with the ArchDaily community. Our selection below shows the best of the nearly 200 submissions we received, which were judged not on the quality of the architectural design they showed (though much of it was excellent)…
Post a Comment
Read more

February 09, 2019
In a Norwegian fjord ten Americans are doing what no one has ever done before. They dive and work at a depth of 320 meters (1065 feet). The divers have to succeed to secure the future of an oil-nation. But something goes terribly wrong.